ALUS Canada recognizes impact of Dave Reid, Director of Research and ALUS pioneer whose retirement was announced on June 6, 2018.

ALUS Canada wishes to thank Dave Reid, an ALUS pioneer whose retirement was announced on June 6, 2018, at a special ceremony held at Y.U. Ranch in Tillsonburg, Ontario.

“Dave Reid has been involved with ALUS since the start, way back in 2002,” said CEO Bryan Gilvesy. “He later served as our Eastern Hub Manager, and as our Director of Research from 2016 to 2018, and along the way, he had a massive impact on the ALUS program, one that will never be forgotten.”

A life-long resident of Norfolk County, Dave Reid grew up on a farm, then had a long career as a biologist and stewardship coordinator with Ontario’s Ministry of Natural Resources, before helping to kick-start the ALUS program. As such, Dave was perfectly placed to become the primary author of the ALUS principles and ecological restoration guidelines.

“I’ve often referred to him as the “conscience” of the ALUS program,” said Gilvesy. “It was Dave who insisted on the PAC model, where each local ALUS program is run by a stewardship council, and this turns out to have been the key to our success across Canada.” “He is a living example of how quiet dedication and determination can lead to truly amazing accomplishments,” said Casey Whitelock, who succeeded Dave Reid as ALUS Canada’s Eastern Hub Manager and spoke movingly about Dave’s role as a mentor during his retirement ceremony. (Photo: Splash Photography)

Dave Reid also had an influence on ALUS’ younger staff, including long-time ALUS Norfolk Program Coordinator Casey Whitelock, who succeeded Dave as ALUS Canada’s Eastern Hub Manager when he took on the new role of Director of Research.

“I was lucky enough to have a keystone in the conservation world as an advisor and mentor for many years,” said Whitelock. “Dave let me shadow him, guided me and gave me helpful advice on how to handle my responsibilities. He filled my head with knowledge beyond my years, and he made it possible for me to have a career with great purpose.”

Speaking on behalf of all ALUS Program Coordinators who have been mentored by Dave Reid, Whitelock highlighted Dave’s “great and generous spirit. He is a living example of how quiet dedication and determination can lead to truly amazing accomplishments.” This Award recognizes participating farmers and ranchers who are excellent stewards of the land and who have done innovative work in producing ecological services on their farms through the ALUS program. (Read more about the 2018 honorees here and here).

As a retirement gift, letters of appreciation penned by Dave Reid’s ALUS colleagues were collected into a commemorative book that was presented to him by Bryan Gilvesy. 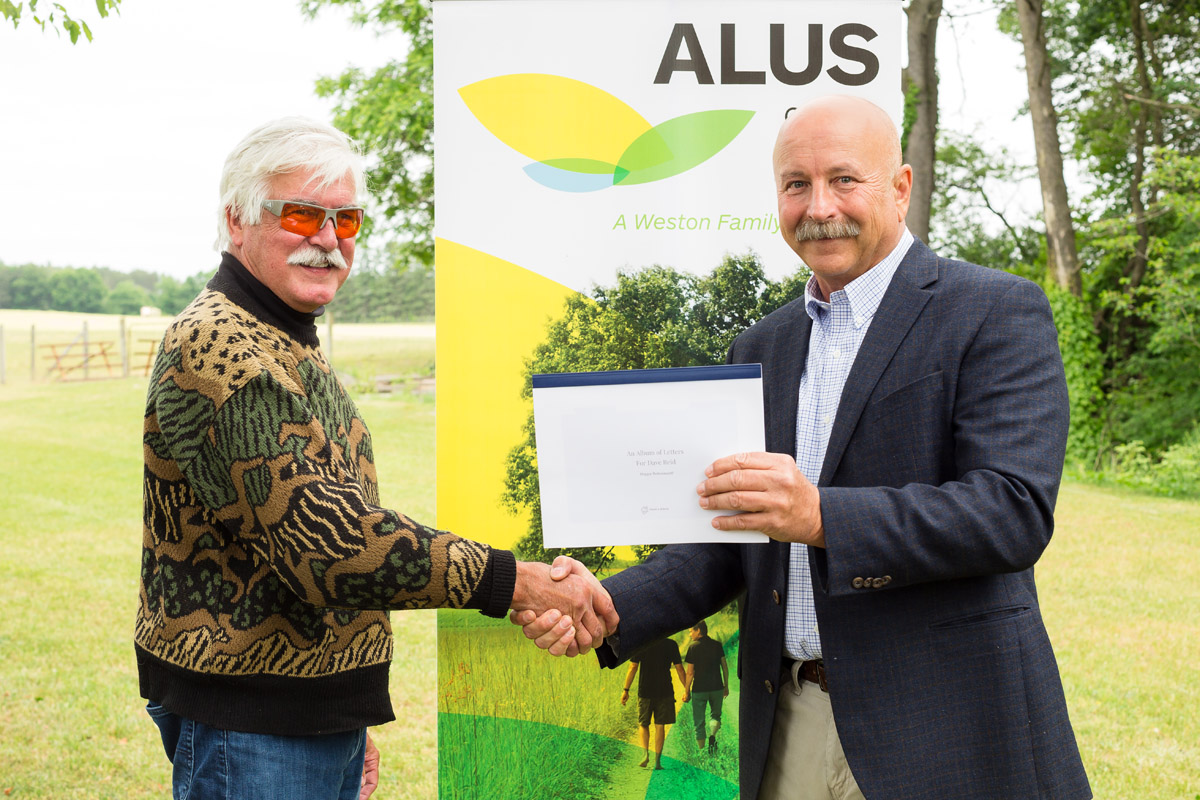