Thanks to funding from the Lake Winnipeg Basin Program, ALUS is putting beneficial projects on the ground and bringing the community out to see them. 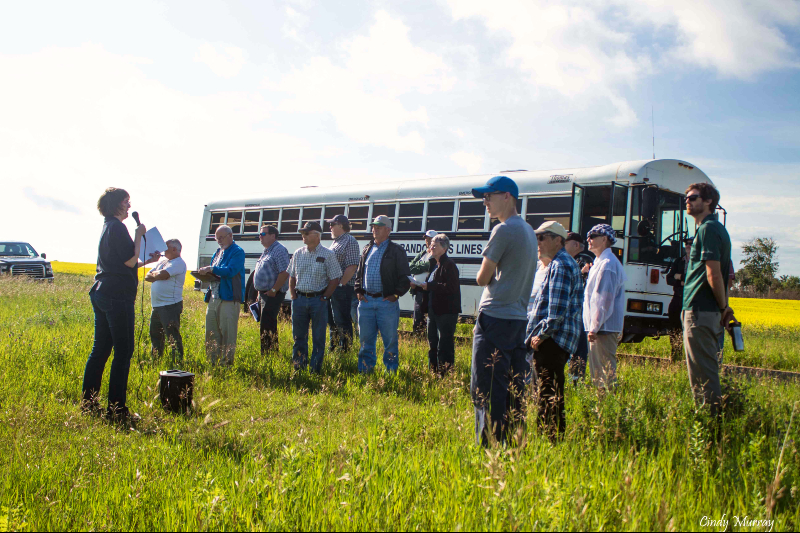 In 2019, the Government of Canada’s Lake Winnipeg Basin Program (LWBP) announced nearly $140,000 in funding to ALUS Canada for important natural infrastructure work in Manitoba and Saskatchewan.

Not long after that, the ALUS Little Saskatchewan River (ALUS LSR) program organized a bus tour of projects in their conservation district to showcase examples of projects having a positive impact on the environment.

The July tour, which was funded by ALUS Canada and its Lake Winnipeg Basin Program funding, in addition to support by the Little Saskatchewan River Conservation District, built awareness of the types of programming available to farmers and ranchers in the area.

It was a beautiful summer day and, as the tour bus shuttled them from one site to the next, 22 attendees were able to take in beautiful Prairie scenery with bright yellow canola and purple alfalfa stretching across the landscape, en route from Rapid City, Manitoba, to the family farm of ALUS PAC member Dennis Pedersen.

Located near Newdale, Manitoba, the Pedersen farm was founded in 1881. Dennis’ son Kevin, who is also an ALUS participant, represents the fifth generation of their family to farm the same piece of land (see 2015 video here).

Both Dennis and Kevin Pedersen enrolled in ALUS to improve parts of their land that were hard to access and prone to frequent flooding during extreme rainfall or snow melt. The soil in these areas was not ideally suited for agriculture, due to high salinity and poor crop yields: they could instead serve as a buffer zone between more productive cropland and low-lying creeks and wetlands.

ALUS helped Dennis Pedersen create riparian buffer zones featuring perennial, deep-rooted grasses, which are able to capture and filter excess nutrients during floods. Without these projects in place, water would flow off farmed fields into wetlands and creeks, carrying with it various farm inputs, such as fertilizers, herbicides and pesticides, as well as some of the topsoil.

ALUS riparian buffers serve to disrupt this process: A thick band of carefully selected plants help capture pollutants before they can enter the stream, allowing runoff water to re-absorb into the soil instead.

This improves water quality for all: not only on the Pedersen farm, but also for neighbouring communities in the watershed.

During the site visit, Pedersen and ALUS Coordinator Colleen Cuvelier presented specific details about his ALUS project, which is being established over two years. Year one (in 2019) involved mowing and site preparation; year two (in 2020) will involve seeding the area.

During the 2019 tour, guests could already see a clear contrast between the chaotic natural growth, buzzing loudly with pollinators, and the adjacent neat monoculture on the Pedersen farm. Establishing an ALUS project would normally include trying to eliminate the unwanted weedy species, but the Pedersen project already features naturally regenerating forage grasses and forbs that are thriving in this rich riparian area.

Pedersen is one of 21 ALUS participants in the Prairies who will benefit from ALUS Canada’s LWBP funding. In total, this grant will help ALUS establish more than 825 acres (334 hectares) of new ALUS projects in Manitoba and Saskatchewan.

This means enhancing wetlands, seeding buffer strips alongside lakes and creeks to filter surface water before it flows into these waterways, and establishing offsite watering systems and wildlife-friendly fencing to prevent livestock from damaging these enhanced wetland ecosystems.

All these ALUS projects will help improve water quality while also producing critical wildlife habitat and mitigating flood and drought risks for communities downstream, as part of a full suite of benefits known as ecosystem services.

“One of the best ways to improve water quality downstream is by restoring and enhancing wetlands upstream,” said Paige Englot, ALUS Canada’s Prairie Hub Manager. “The ALUS program empowers farmers and ranchers to be positive change-makers on the Prairie landscape.”

The July 2019 Little Saskatchewan River Conservation District Tour was funded by ALUS Canada, through its Lake Winnipeg Basin Program funding, in addition to support by the conservation district.